A German wine producer has improved its productivity by retrofitting an anti-corrosion chain on its conveyor system. The company invested in a Tsubaki Neptune chain that has increased service life and reduced downtime with less frequent replacement and maintenance requirements. The upgraded chain has also reduced the total cost of ownership. 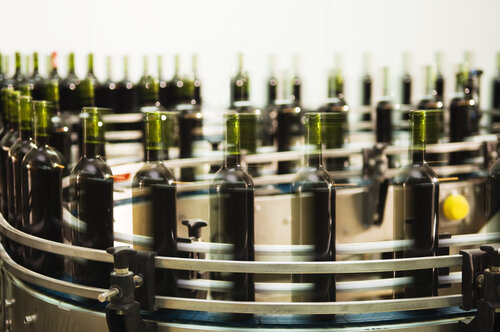 A wine producer in Germany bottles the wine and uses a series of conveyors to transport the bottles through the production process. At the end of the system, the bottles are buffered and accumulated on a spiral conveyor. The spiral conveyor is driven by a roller chain, however as it's a wet environment the chains rapidly corrode and become subject to high friction. This results in a short wear life.

The chain's position is difficult to reach from a maintenance perspective and also, as a result of the wet environment, relubrication is difficult. With an irregular lubrication regime combined with the corrosive conditions, the conveyor's chain required replacement every two years. Frequent chain replacement increased procurement costs and, because of the chain's difficult to access location, it also increased downtime, reducing the wine producer's productivity.

The wine producer replaced the spiral conveyor's chain with Tsubaki Neptune, designed for use in corrosive environments. The Neptune has significantly outlasted the two-year service life of the previous chain and has already reduced the total cost of ownership. Crucially, the chain's extended service life has minimised downtime with less frequent replacement and servicing, which has also reduced the time and cost of maintenance.

The Tsubaki Neptune's durability is a result of its coating that is applied to provide resistance to corrosion and chemicals. With a two-layer coating including resin covering the links, plates, bushes and pins, the Neptune is tested to withstand 700 hours of salt water spray. The chain is also tested for 2,000 hours' resistance against sodium hypochlorite and sodium hydroxide, which are frequently used as cleaning agents in the food and beverage industry.

Other anti-corrosion type chains such as stainless steel variants have to make concessions in the strength department. However, the Neptune is a carbon steel chain with the same tensile strength and allowable load as Tsubaki's standard, hard-wearing roller chains. The special coating also protects against friction, which speeds-up chain wear, by minimising severe dynamic contact between the roller and sprocket.

The treatment to reduce corrosion can create harmful environmental consequences and for the wine producer, it was crucial to avoid these effects. Tsubaki's Neptune chain is free from harmful hexavalent chromium and other potentially dangerous elements such as arsenic, lead, mercury or cadmium.

Because of the anti-corrosion properties, the Neptune chain is frequently used in applications that are subject to frequent and rigorous alkaline cleaning and wet environments. Typically, this includes applications in the food & beverage industry, waste treatment, packaging and PET bottle sterilisation. The German wine producer is satisfied with their investment in a premium grade component, which is key to the performance and productivity of their manufacturing process.